Corp., a company that strives to expand the use of renewable geothermal heating and cooling for a more sustainable future. Andrew had been working with solar, wind and hydro around the world prior to founding the company with business partner, Jim Ilkay, owner of a building development and construction consulting company.

“Coming home to Canada, I felt innovation was emerging around how we use energy in our homes,” he said. Andrew noted that replacing fossil fuels with renewable energy has been developing, but he identified a gap in how we heat and cool our homes and buildings. “There’s a real opportunity for the efficiency of geothermal in heating and cooling,” he said.

Andrew explained that current technology requires drilling into the ground up to 600 feet. Consequently, he and his partner wanted to address lowering the cost and finding a way to implement technology more quickly to mitigate delays in the building cycle.

Innovia GEO Corp. is using geothermal foundational piles where the geothermal functionality is built into the steel pile foundation. This cuts costs by piggybacking on the foundation already going into the ground. A pilot system in Waterloo has been installed, commissioned and is up and running collecting comparative data while it operates alongside a traditional geothermal system. Because Innovia GEO Corp. is working with Ryerson University who is helping to develop their engineering models of the piles and assisting with testing, their work has also provided opportunities for one student to graduate with a masters and a second student is currently using the data for their master’s thesis! It has also resulted in research paper publications which have been rewarding for the company. 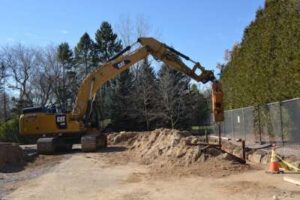 Reactions have been positive so far and include acknowledgement from within the construction community for the need of energy-efficient, sustainable buildings especially related to heating and cooling. “They see that geothermal has a lot of potential because existing systems work well, but we are reducing cost to make it more economical,” said Andrew.

Originally their plan was to consult on the use of existing technology however, they are now creating new technology which they didn’t anticipate but he said things just fell into place. Working with Innovation Guelph has connected the entrepreneurs with an advisor who has encouraged them to build out their commercialization plan and to prepare for potential investors. IG Mentor Niel Palmer helped them with some technical issues during the pilot and introduced them to people who could help with quality assurance processes.

Andrew advises entrepreneurs to never give up. “Challenges arise and time can be a killer,” he said. “You can’t get there if you give up. Be ready and able when the opportunities do happen.”