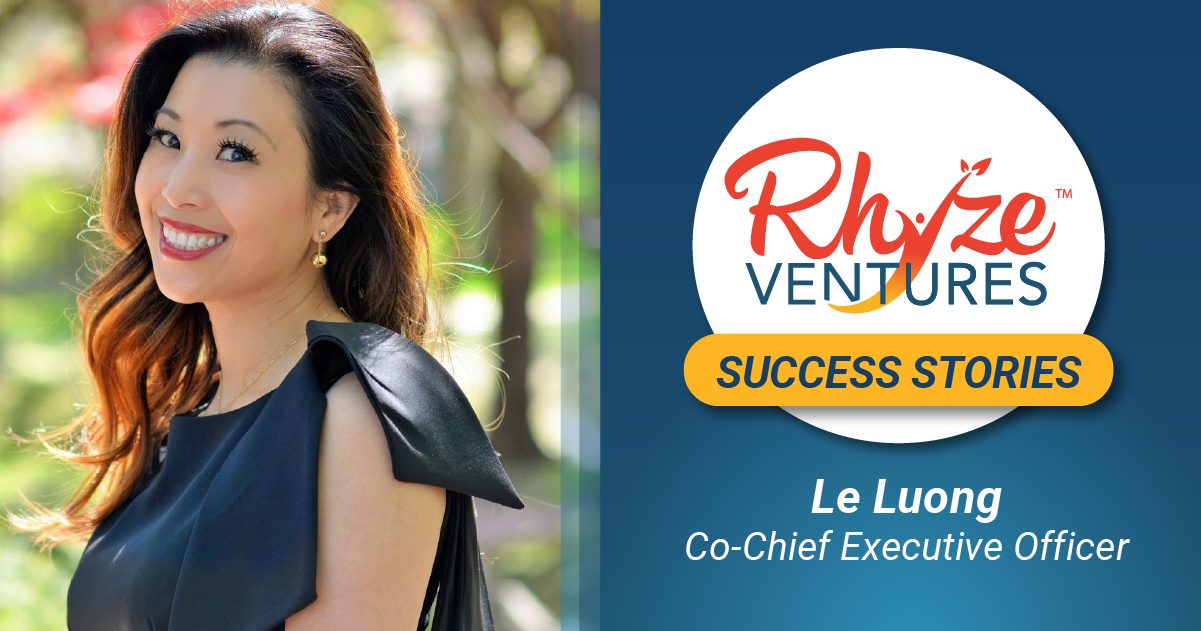 Le Luong  is the Co-Chief Executive Officer of Nurture Growth.  Nurture Growth rescues food waste and transforms it into safe organic fertilizer for commercial and home use. Le previously was involved in Innovation Guelph’s Rhyze Up! program before applying for Rhyze Ventures’ scalable stream. Luong participated in the second cohort Rhyze Ventures pitch competition and as the winner of the scalable stream. As one of the winners, Le shared in an overall pitch pot prize of $25,000 that was generously sponsored in part by Libro Credit Union.

With the funding obtained from winning, Le was able to implement her Amazon project that propelled her business forward. She projects $300,000 sales that will, in turn, finance future international expansion.

Luong said Rhyze Ventures was her first pitch competition and she didn’t realize how important the skill of pitching was until she started to meet with investors and key stakeholders. “With limited time in front of interested prospects, I had to articulate my business plan in a clear and concise manner,” she said. “As a result of participating in this program, I have engaged with a number of pitch events and demo days where the feedback was consistently positive. I couldn’t have done this without the skills I learned during the pitch competition and working with my mentors.”

As an entrepreneur and business leader, Luong said she gained confidence due to the competition and has since gone on to several initiatives resulting in big increases to her sales pipeline for 2023. These initiatives include securing shelf space in Home Depot! “In addition, I was a top 20 finalist in the inaugural Thrive SVG Canadian Accelerator where the feedback was ALL positive,” Luong said. “Being part of Thrive, we will be introduced to strategic investors which will propel us to the next level. All of this could not be possible without the support of Libro Credit Union as it is very difficult to finance and launch a business, especially for women. In male dominated industries such as agriculture (agtech), biotech and cleantech, the barrier to entry is even more difficult.”

Since the pitch competition, Luong hired one full-time sales staff, one part-time strategic management staff and a consulting company to implement the Amazon project. She says Nurture Growth, at full capacity production, upcycles 32,000 KG of food waste which is equivalent to removing emissions from 35 cars off the road. She said that as they produce more, they will have greater positive impact to reducing GHG in landfills and in helping farmers grow more nutritious foods.

Luong said she thinks pitch competitions are especially important for women-owned businesses since often they are small and rarely require large scale-up or large investments. “Having pitched in front of more than 100 investors, I realized that this is an important skill if I want to attract further investment dollars,” she said. “In the real world, the investors are not a kind and will be very blunt if your ideas are not well articulated or your business plan doesn’t make sense. The pitch opportunity allows women-owned business to learn this skill, continue to develop their confidence and understand there are more opportunities out there.”