Regenerative Agriculture: Planting the Seeds for a Healthy Ecosystem 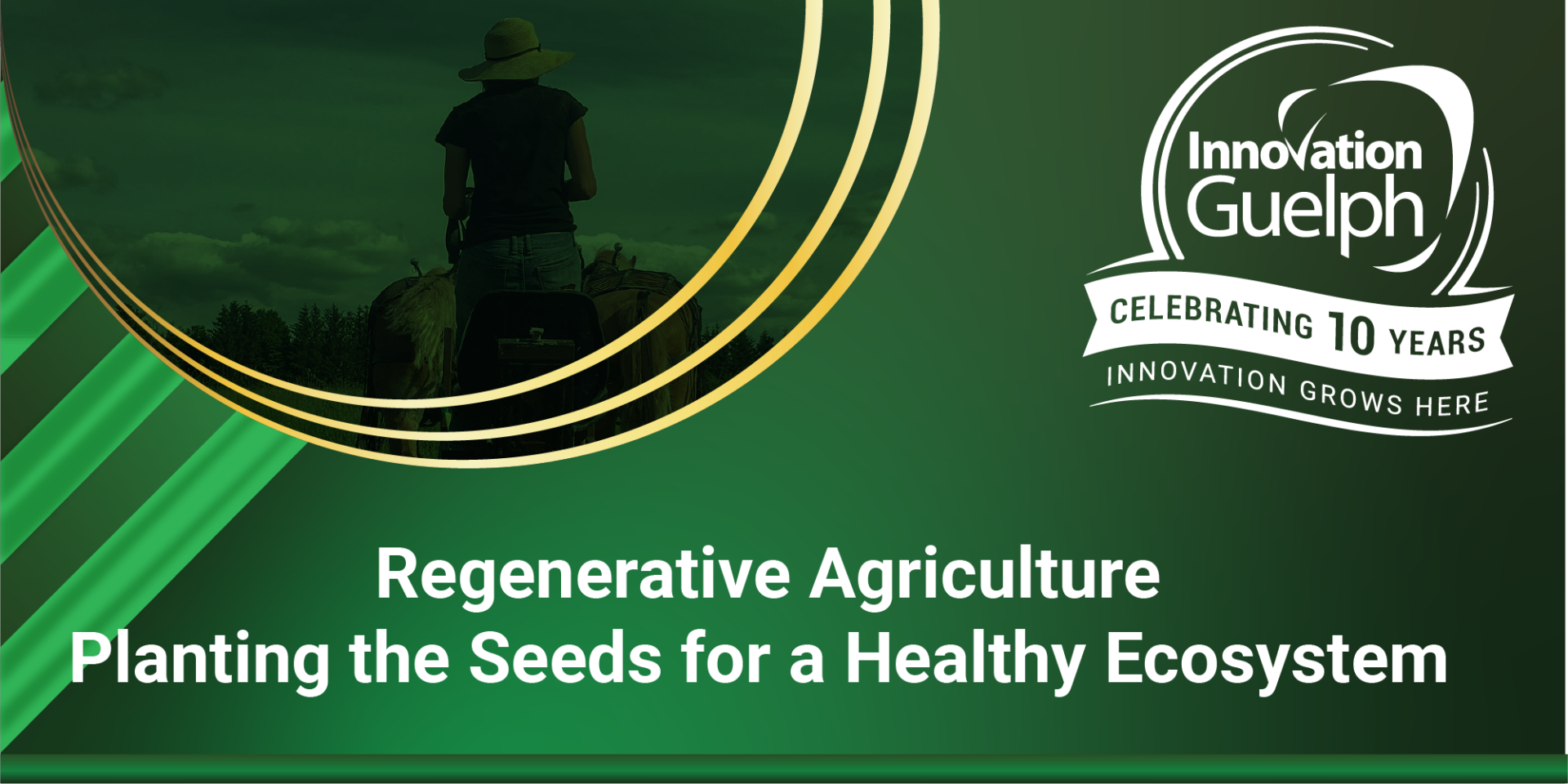 We plant a seed and it sprouts only when conditions support it by providing water, oxygen and the right temperature and amount of light. As that seed germinates and pushes up through the soil, its role in the ecosystem has just begun.

Cameron Ogilvie, Knowledge Mobilization Coordinator, University of Guelph said the answer to why regenerative agriculture and soil health matters, depends on who is asking the question, and who is answering. According to Ogilvie, farmers care because soil health directly impacts the sustainability of their businesses. Conservationists care because farmland soil health impacts water, wildlife and greenhouses gases that contribute to climate change. He said private landowners manage a significant portion of arable land with differing management practices that impact our environment. “We cannot expect private land managers to act in the best interest of society without the proper incentives in place to encourage that action,” he said. “We all need to eat, and 95 per cent of our food comes from soil. If we don’t protect this resource, that puts our food supply in jeopardy.”

Researchers at the University of Guelph are studying all these aspects of soil management and are evaluating the impacts of these practices on crop yields, economics, carbon sequestration, other greenhouse gas cycles, and microbes in the soil. “We’re holistic and interdisciplinary in our approach,” Ogilvie said. “Our researchers are very collaborative, both within the university and with other universities.” While Ogilvie said change like this is slow due to costs, the investment of time required, social norms etc., he is hopeful things are moving in a more regenerative direction.

Innovation Guelph became more aware of regenerative farming/agriculture through the stories of several clients who are passionate about their farming operations supporting these principles. Val Steinmann of Heartwood Farms began learning about an approach to farming related to permaculture about 20 years ago before the concept was called regenerative agriculture. Her farming neighbour and mentor expanded Steinmann’s view beyond sustainability. “She told me we need to look beyond and embrace the concept of regeneration, looking at what it means and what our task is,” Steinmann said, explaining it’s based on a set of universal principles as opposed to particular practices. “We as farmers need to pay attention to the unique qualities, properties and the state of the land we are tending,” she said. “Regenerative agricultures invite us to be more curious, inquisitive and observant of the natural cycles, and soil is at the heart of it. If we develop more of a curiosity about how to create conditions for life to thrive and use the principles, we can find a way forward uniquely suited to the remediation of our farms, and our own expression of the principles.”

Steinmann said she would like people to understand that it is not about good vs bad when it comes to farming. It is about changing the orientation to reclaiming a healthy relationship with the land and with all the community of life around us. To create conditions for life to thrive at Heartwood farms, they are working with nature, and reinstituting healthy natural cycles. “I feel like my personal journey has been of understanding my role in participating in the web of life,” she said. “The more that reorientation takes hold in the broader community; in raising children, leading staff and cleaning up the community, if we understand the interconnections and our actions, we are creating a tapestry that supports what the earth already wants to be doing – creating complexity and diversity.” Steinmann reminds us that we are all responsible for our piece of being sensitive to the wisdom of others and understanding where our gifts are, so we do our work with joy.

“My orientation is toward creating conditions for life to thrive in tending my farm. I think we need to explore how we transition as farmers to tending and nurturing the whole farm system. I want to contribute to deepen and broaden the conversation in the hearts of people.”

Being in Harmony with the Land

Kyle Garlow, who farms on the Six Nations said Natives have relied on mother nature and as a result have understood that soil is alive and sustains life. “It’s true that we haven’t even touched on the biology of it,” he said. “We’re just beginning to learn.”

Garlow practices no till, cover crops, rotation and natural manure fertilizer on the land he farms. “Part of my approach has been learned through tradition and partly from what I’m learning as a farmer,” he said. “Soil health impacts food – and we are what we eat. Healthy soil will lead to crop resilience during extreme weather and has shown to produce larger yields!”

Delving further into this indigenous perspective, Traditional Knowledge Keeper for Anishnabeg Outreach Gerard Sagassige said all human beings have a responsibility to nurture soil and water health. “We are losing many traditional medicines because soil is being artificially transformed to the point it no longer supports medium-specific medicines,” he said. Soil health impacts biosphere and wildlife and Sagassige suggests finding natural or traditional ways of managing what we deem as pests to bring harmony and balance. “Regenerative agriculture/farming is something that was taught to me through my culture,” he said. “Indigenous people are in harmony with the land and have a lot of teachings surrounding it. We have an honour process through our ways of being and ceremony to nature. There were many ceremonies in the past to keep the land and water in balance. Taking care of our land is important, it is our home.”

Another farmer, Aric Aguonie, owner of Earth Haven farms in Tweed, ON, grew up removed from Indigenous traditions and wanted to get back to living them in a modern world. He has chosen to do that as a farmer by giving back to the land more than he takes. After attending college and learning about biodynamics, his mom bought a farm, where he began to create a loop that began and ended with caring for cows. “I’m a soil-builder,” he said. “Always composting.” It’s very important to Aguonie to give back and although his farming methods don’t make him any more money, he feels good about what he does.

Aguonie said, “Just like a house needs a good foundation to stand strong, we can look at soil as a foundation too.” He explained that traditionally, animals migrated across properties, pooping where they walked. With land ownership that ended. However, he finds that people are starting to become more open to grazing animals on others’ properties to enrich both the land and the herds.

While global economics result in plants and produce coming from other countries, Aguonie believes this may keep people happy, but it doesn’t keep them whole! To summarize his principles, Aguonie said he could simply plant a seed and take the fruit, but he finds it more fulfilling to put goodness into the soil, building its nutrients. He said his approach leads to “happy cows, happy soil, happy plants and happy people.”

For another like-minded IG client, the shift to regenerative farming was not a lifelong inspiration. While researching how to make their pastures better for their grass fed and finished beef, they were introduced to the concept through a podcast and book and have been on a mission to transform their farm ever since. While 4th Line Cattle Co admits the regenerative practices may take longer in some respects, co-owner Tamaran Mousseau said there’s only one planet and it needs to last beyond us. Mousseau explained that the investment is more significant in time than in money for their beef and pork to be market ready when following regenerative principles. But, she said, “The leaps and bounds in our soil quality improvement has been very exciting to experience and each year the grasses and hay crops just get better.” According to Mousseau, their pastures have done a complete turnaround by implementing rotational grazing and increasing diversity through planting. “The soil quality is slowly becoming the best it’s ever been,” Mousseau said. “We’ve added beehives on our farm that did exceptionally well last year and over the winter. Just a few farms away the owners had low honey production and most of the bees didn’t survive the winter. We take that as a pretty good sign that things seem to be going in the right direction around here.”

That seed we planted has found its way through the soil and begins to flourish. It represents a victory and perhaps a testimonial that soil health – at least in this location – is regenerating, supporting life and taking its place in a healthy ecosystem.

To learn more about regenerative agriculture: