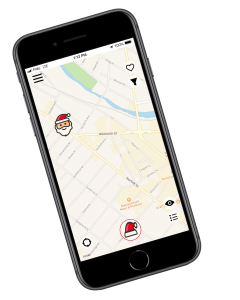 Tracking Santa during the Guelph parade.

For all the Guelph parents who, filled with anticipation, gather their children in front of the tv or computer to track Santa’s location on Christmas Eve, a new app will allow them to experience that excitement on November 17. Accessing inside information they can keep an eye on Santa’s progress along the Guelph Santa parade route!

Jason Bavington of Midnight Illusions and DUX app describes DUX as your direct guide to all things local. With it’s built-in augmented reality (AR) feature, you simply hold up your iPhone as you walk down the street and local culture, tourism, and small business information pops into view in real-time. The app informs users about specials and deals from stores and businesses, while also displaying cultural and tourism insights that can be shared via social media with friends.

As a child, Bavington loved going to the Toronto Santa Claus parade, seeing the colourful floats, hearing all the bands, laughing at silly clowns and other funny characters before finally enjoying the moment everyone waits for in the end – when Santa arrives.

Guelph folks can download DUX for iPhone free at www.dux.city and get ready to track Santa. “We all see how excited kids get when they know that Santa is getting closer,” said Bavington. “As Santa is five streets away, then four, then three – it will generate so much excitement and anticipation in both kids and parents. It’s another layer of interaction and magic that makes parade day so memorable and special.”

Bavington said in order to get Santa to wear a tracker he had to make some promises. “First we promised that we weren’t being naughty. Then we promised we wouldn’t track him all the way home. He really is quite friendly and gave us a big deep belly laugh when we shared our ideas with him.”

While we’ve seen apps and sprites that encourage kids to be good, the DUX app is different. “I am not a fan of apps that instill a lack of trust in our children. I don’t feel this is positive or healthy for their development as responsible individuals. In fact, such apps can achieve the opposite effect of their intentions,“ he explained.

The Santa tracker part of the DUX app is intended to be carefree and simply fun! Can we trick Santa? Can we know where he is before he finds us? Does he know we can see him coming down the street on the phone? Watching Santa get closer to you on the iPhone app builds that excitement and anticipation that helps make the day so special. How does the phone know? How does Santa know? How does it all work? Our phones can seemingly do so many magical things these days. The Santa tracker playfully triggers that mischievous part of us that tries to stay up late on Christmas Eve or carefully checks the cookies and milk in the morning.

The bonus? When Santa has come and gone, you’ll still have a direct link to local small business insights and discoveries in the downtown Guelph area and beyond – Santa’s gift to all! www.dux.city