With life’s swift cadence, we are constantly pressured to accomplish as many tasks, make as many contacts and close as many sales as humanly possible, taking on every opportunity that comes our way. The word ‘no’ quickly becomes dusty and forgotten.

While multitasking and keeping options open is the new norm, you’ve likely heard stories about people who found success by being selective, hyper-focused and saying no.

But these are grand examples. If you’re reading this, chances are you’re not a billionaire (yet), and are probably thinking you just can’t afford to say no the same way they can.

We get it, we really do. It can be nauseating to think of missing out on opportunities or connections because you turned them down, so you don’t. While you might feel as though you’re doing the right thing by saying ‘yes’ every chance you get, doing so can have serious consequences on your health and, ultimately, the success of your business.

About 80 per cent of startups successfully make it through that first year – it’s in the next five that the potential for failure really looms, with nearly half of new businesses failing; only one in three make it to the 10-year mark.

A study by CB insights on the biggest causes for new business failure revealed predictable reasons like no market, lack of capital or being out-competed. However, more surprising reasons like burn-out and loss of focus also made an appearance.

One simple way to avoid suffering from the latter two is to start saying no, however uncomfortable that may be.

But why is it so uncomfortable? And how can we overcome the urge to say yes? 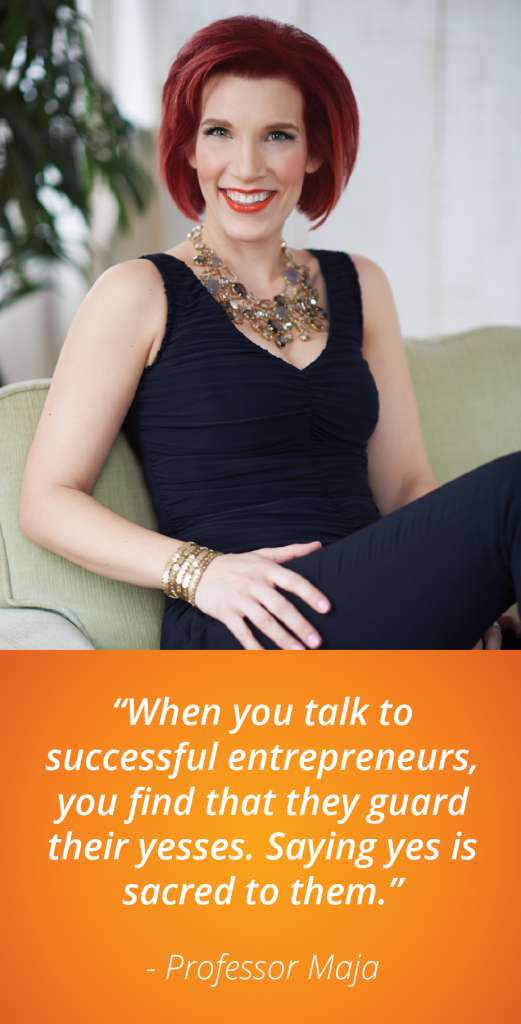 According to sociologist and author Professor Maja, we are prone to people pleasing tendencies that make us fixated on “the idea that every single person has to like us, and somehow niceness will protect us from rejection.”

Unfortunately, entrepreneurs are not immune to these tendencies. But they make our boundaries blurry, as Maja says, which incites us to say yes to every single opportunity or request.

“We feel stressed and anxious at just the thought of having to say no to someone’s request. Then we do everything we can do avoid having that difficult emotion, and there are very real consequences when you’re an entrepreneur. We ignore and downplay our needs, and our needs are tied to what we want for our business and our company and where we want to go with our work.”

“When you talk to successful entrepreneurs, you find that they guard their yesses. Saying yes is sacred to them. I like that way of thinking. That’s why I do honestly think about my decisions. Maybe it didn’t move me closer, but I wanted to prioritize this relationship, this experience – at least I’m cognizant of it.”

However, she notes that new entrepreneurs don’t always have the privilege of saying no.

“You’re sort of planting seeds everywhere to get that name brand recognition, and so you do have to say yes,” she said. “But if that happens, where else are you saying no? We have to learn how we can prioritize the people and the experiences that we need to for our business, and then say no to the rest.”

The idea that we should be saying no more often is supported by the results of a 5-year productivity study by renowned author and professor Morten Hansen. Studying the habits of 5,000 managers and employees across North America, he found that those who did less actually performed better.

“We assume that hours worked and performance increase in a linear fashion. But that’s not true,” he said in an interview with Forbes.

Consequently, it seems taking on too much can damage your productivity and create a lack of focus.

“We find ourselves busy, but we’re not productive, and a lifetime can be wasted on busyness with nothing to show for it at the end,” she said.

“In his study, the reason people didn’t apply this [do less, then obsess] strategy was because they were saying yes to every request. I also think it’s tied to multitasking. The science shows that you can’t multitask, but we’ve sort of been trained into thinking it’s a good thing. And so, we have to get more comfortable with saying no more often than we would like.”

Moreover, saying yes too often can cause you to burn out.

As Hansen told Forbes, “It’s like squeezing juice from an orange. At first, you get a lot of liquid. But as you continue to squeeze and your knuckles turn white, you extract a drop or two. Eventually, you reach the point where you’re squeezing as hard as you can but producing no juice. You would have done better just to leave the well-squeezed orange alone.”

So, to promote a successful business and avoid losing focus and burning out, you should be evaluating why and how frequently you say yes – something Maja says entrepreneurs don’t do often enough.

“You know deep down inside you probably shouldn’t have said yes, but you thought, ‘what if I miss out? What if this is the one?’” But, she said, “we can’t say yes to every opportunity. That fear is always going to be there, and that’s why it’s so important to be clear on why you are doing what you’re doing.”

“Being an entrepreneur is scary. Sometimes you’re going to mess up and make the wrong call, but hopefully you’re learning from those mistakes.”

Stay tuned for the second part of this blog to learn how you can say no.